Cold Day in the Subway 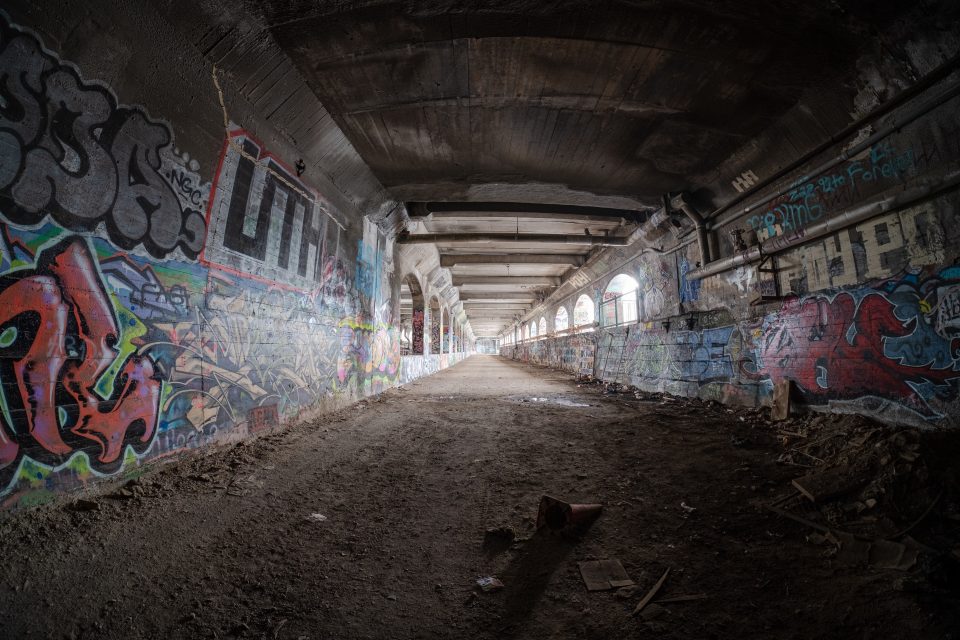 I had gone down into the subway back in August, just to see how things had changed.

Back then, construction was still underway, reinforcing the area under the Main Library for the promenade along the river’s edge. There was a great big hole, allowing sunlight to stream in and revealing the new pillars and substructure. In order to keep people out and equipment in, fences were put up so I had to climb just to get in and out. If you know me, that wasn’t a pretty sight.

It appears those days are done.

One cold day last week I decided to go down again and revisit, as I have many times over the years, how the subway has changed.

Fences were pulled back and gates were opened to allow free flow of traffic. So I walked right in and looked around.

I had decided that I would walk from one end of the subway to the other. It’s less than a mile, but nearly half of it is in darkness.

Aside from the cold, it was a peaceful walk. I stopped occasionally to snap pictures of graffiti in complete darkness, where only the dedicated would see it. These artists do it for the love of it, knowing no one would just stumble upon it. Some of it was beautiful, most vulgar.

The subway is still used by those who have no other place to go. I did come across a number of cubby holes with people’s belongings. Some more elaborate than others, but most were just piles allowing protection from the elements. I chose to respect their private spaces, but I did not come across anyone down below on this visit.

My footfalls echoed along the path. There were still places you could still see the lines of rail along the ground, leading off to the distance. When I looked around I could see where staircases once lead up to the world and window to nowhere build into the concrete. I wish I could have been there all those years ago to see how the view changed and what Rochesterians experienced.

Well, here are a few things that I saw while I was down there. I think that I’ll try to go down more often once the weather improves. Enjoy!


Warning: count(): Parameter must be an array or an object that implements Countable in /homepages/26/d129232589/htdocs/wp-includes/class-wp-comment-query.php on line 405